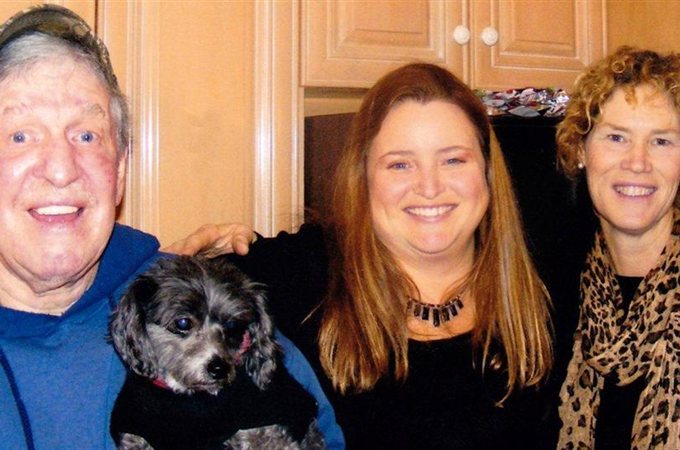 Walking into Bill’s home and seeing his room I was immediately overwhelmed by the amount of pictures on his wall. Spanning the entire room is a visual history of 30 years of Bill’s friendships and relationships.

This was not always the case, Bill spent many years at South Western Regional Centre which was a large institution for people with disabilities. Institutions like this are dehumanizing places. Bill met Janet while living at South Western Regional Centre. Although Janet started out as a paid support worker to help Bill with his move, this soon blossomed into a 30 year friendship.

Bill spends weeks at a time with Janet and her husband at their home in Chatham. Bill takes the train and they meet him at the station. Bill spends every holiday with Janet and her family, spends summers at their trailer where they fish together. And what summer is not complete without an ice cold beer! Janet has a large pig farm and Bill works on the farm and enjoys the animals. When talking with Janet, the first thing she says “Bill is my best friend and part of my family”.

Janet and Bill have been friends since 1977. Bill has gone with Janet and her husband Tom to their friend’s cottage and Bill will fish for hours. Myrtle Beach has been a family adventure for the past four years and Bill has been there every year. Janet says “I don’t know why people come in and out of our lives, but what I do know is that Bill is a big part of mine, my family and my friends lives. We love him and he has a special place in my heart”.

Bill has known Janet’s daughter since she was a baby and still to this day he calls her baby.

When Bill is in Welland he works at Lynn’s Pet Centre. Bill has worked there for over 25 years. Lynn Whiteley, owner of Lynn’s Pet Grooming and Supply Centre in Welland, has been Bill’s employer for over 25 years. This relationship has expanded from an employee / employer to a true friendship. Bill spends many special occasions with Lynn and her family. They do things together and Bill is missed when he is away.

Although Bill started out at Lynn’s as a work placement in the mid 80’s with support from Community Living, it was soon clear that these supports were not needed. Lynn is quick to point out that Bill is more than my employee, he is my friend. Bill and Lynn spend time together outside of work hours, whether it is shopping, fishing or dinner and beers. Whenever we are out, someone always says “Hey Bill”. Being an integral part of the life of the business, Bill assists in grooming the dogs, helping people carry out items to their cars. Customers will often bring gifts to Bill at Christmas. Bill never forgets a face!

When talking with Bill for this article, I spoke to Bill and Paul Keary who has known Bill for many years, One of the comments that struck me was that Paul said everywhere Bill goes, people know him…not only that, Paul’s social network has expanded because of Bill. People Paul would have never met, he has met through Bill and out of this friendship happened.

Why is this story important? Most of us take our friendships for granted. Most people who have disabilities live isolated lives and are only connected to paid supports. All of us want to have friends and contribute to the life of our communities. This story shows what being connected is all about!